Posted on February 22, 2015 by divadiversion

Bless her lil heart my sister Terry tagged me in her blog; tburrisquilts@BlogSpot, months ago to participate in the Around the World Blog Hop.  Good thing she loves me or I’d be on her no ship list!

What am I working on: 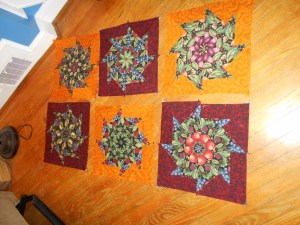 Love the way this fabric shows with the yellow background.

This fabric is absolutely regal!

What’s left after cutting the Stack & Whack gives me stars

Eye Spy using blocks from the Quilt Square Fabric Swap on Facebook. My apologies for the poor lighting.

What is my process?  How do I create?

Sometimes it’s a book, other times it is an article.  Show and tell rocks my world.  Creative people inspire me.  When working in a shop with Karen Sue Walker, being surrounded by creative people and beautiful fabrics, I would always be planning my next projects.

It starts with a seed of an idea.  Sometimes it is visual, other times it is just something that has been forming in my head and just pops out.  My habit the last few years has been to volunteer to be the creative leader for our annual guild retreat every other year to give me an opportunity to work as many of these ideas into fruition in a limited amount of time.  One year it was Civil War Quilting, another was Orient Expressed.  I had a wonderful time with Calendar Girls where the team incorporated apronology into the theme.  Most recently I put a team of volunteers together to do Passport to Quilting.  Those girls worked.  Especially my right hand gal, Kathi Salceies.  My next brainstorm is going to be featured in a series of posts over the next year.  Speaking of Kathi, have any of you ever had a creative partner that had the same vision as you?  That could finish your sentences?  That could take your work to another level?  For me the last couple of retreats it has been Kathi.  More on that in another post.

How is my work different?

I never know how a project is going to turn out.  One of the things I lack is “vision”.    Quilting is play for me.  Coloring with fabric, experimenting with shape and tone, texture and color.  My work is different because of the “broadness”.  I don’t settle on just one technique or one project.  I’ve always got several things going at one time.  Some of my projects morph into a series, others go unfinished for decades.  I certainly don’t think any of my stuff is original, but one of these days I hope to come up with a creative thought of my own.

Why do I create?

First and foremost, it brings me joy. I love the feeling of accomplishment when I actually complete something.  Initially I started quilting not only as a creative outlet, but as a way to be thrifty.  Quilting gave me a chance to give, to make something of value that people were willing to take a chance on.  Many of the groups that I have worked with have made beautiful raffle quilts to make money for charities.  There was a time when I had more time on my hands than money.  Now, I have very limited time, and just enough money to keep me in fabric and groceries.  Creativity has become my habit.

So who do I tag:  Kelly Ann from Kelly Ann’s Quilting, and Pat Sloan from Quilting with Pat Sloan.