The Challenge and the Commission

Posted on December 7, 2017 by divadiversion

One of the people who make me an adventurous quilter is my sister Terry.  She will take on anything and everything.  Seldom does she think “I can’t do that”.

Terry had a box from a woman who wanted a quilt.  Another quilter had begun the process, but due to arthritis in her hands was unable to complete it.  Terry also had a few pieces that were in her work que for quilting.  There was a timeline for this quilt and as the scraps sat on her table weighing on her conscience she “had nothing”.  We’ve all been there with a challenge.  You get a piece of fabric or a block to work with, and you just “have nothing” to make it shine, or sometimes even to make it work.  Terry asked if I would give it a go and I did.  I knew there was a deadline and it was creeping up, but more often than not I work best under pressure.

The box arrived.  I let it sit unopened for a day.  When I opened it I let out a long, heavy sigh.

These were not fabrics that I was accustomed to working with.  Some were thin, others bulky.  Many of the pieces of clothing had been cut apart.  The original quilter had begun appliqueing by hand components of the clothes to background, and the blocks were small.  I began to worry.  I allowed myself to worry for a day or two.  Then I adopted a different viewpoint.

Sometimes when we take on a daunting task, we envision an end product.  I call that having a helicopter view.  The ability to see far ahead and the entire situation.  On occasion that view is far too much to absorb.  So I took a dashboard view.  I just started working one block at a time, not even considering the finished piece.  With each block the task became easier.

Eventually, I had enough together that I could begin a layout.

Plugging along, I finished the top in the amount of time given, and my sister brought it to life with her quilting. 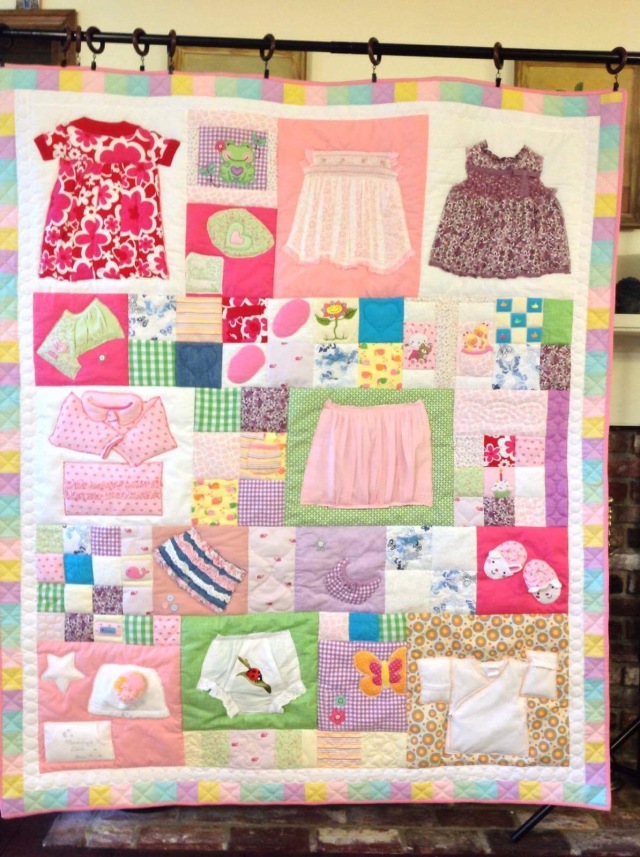 When I was getting ready to deliver it for quilting my daughter was quite taken with the quilt and posted a photo of it to social media.

To my surprise and delight, there was someone interested in a commission for the same type of quilt.

It was a great feeling to have my talent recognized.  I actually named this one while I was working on it.

I called this Daisy on the Move.  I can tell this little girl is always on the move and testing her boundaries.

Terry Burris Quilting did a fabulous job of breathing life and energy into this sweet quilt.

I’m always interested in ways of making my quilting habit pay for itself.  And this did, in education, practice and creativity.

2 Responses to The Challenge and the Commission